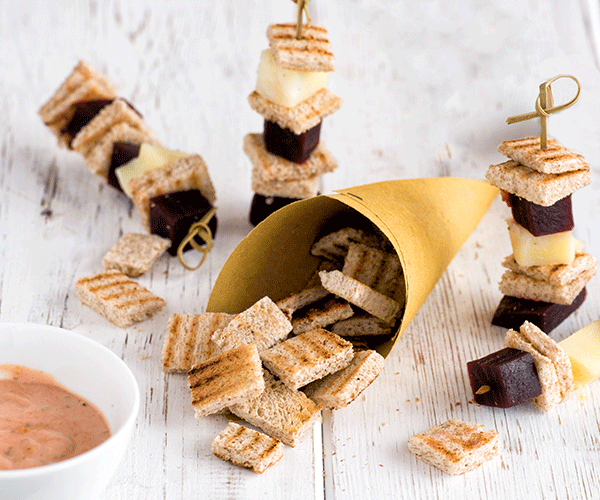 First, prepare the bell pepper sauce: cut the peppers in half, remove the stalk, clean the inside of the peppers by removing the seeds and filaments and then cut them into cubes.

Finely chop the onion and fry it in a pan with a little oil. When the onion has softened, add the bell pepper cubes and cook for 10 minutes, stirring occasionally.

Add the tomato puree, salt and pepper and continue cooking. Add the cream to thicken everything and, once the cooking is finished, blend all the ingredients with an immersion blender until a homogeneous sauce is obtained. Finally, add a few drops of worchester sauce.

Boil the potatoes and cook the precooked turnips, then cut both into medium-sized cubes.

Grill the sandwich bread and cut it into squares.

Now compose the skewer: put a piece of toasted bread, a piece of turnip and one of potato and so on until you finish the ingredients.

Serve the skewers accompanied by the bell pepper sauce in which to dip them.

Stay up to date

Always stay informed on the latest news. Sign up to our newsletter.